– for the Indiegogo crowdfunding campaign

A THEORY OF EVERYTHING

Its time for a newsletter.

Since I wrote the last newsletter a few interesting things have happened. First of all, my book is scheduled to be published in Denmark this spring — I’ll write more about this in the following — and secondly, Johannes and I have continued working on our project, which I’ll also update you on.

My book “SHELL BEACH – the search for a final theory” will be published in a Danish version on the 30th of May 2019. The publisher is Montagne and I’m very happy with the final version, which I have arrived at together with my publisher.

This means that I need those of you, who have ordered a physical book and have a Danish address, to do the following:

I am at the moment working on finding an English (UK and/or US) publisher. I do not know when this will happen but I am quite optimistic that the fact that my book is now being published in Denmark will make it easier to get it out in English as well.

You can all help me enormously be helping me to promote my book. I believe that I have produced an interesting mix of modern theoretical physics, whitewater kayaking, anecdotes from the frontiers of contemporary research in physics and mathematics and with a solid dose of travel and mountaineering tales to pep it all up — but I need all the help I can get to get my book off the ground.

And finally, can any of you guess why I have chosen the title “Shell Beach”? I’m very curious if this title rings a bell for any of you.

My work with Johannes

Lets now turn to my work with Johannes. To tell you the truth things have been a bit uphill for a while, even to the extend that I at one point began to wonder if we’d finally reached the moment when we’d conclude that we are completely lost — that our ideas are nice and interesting but probably also wrong. We’re not in that dark spot anymore, we now see a way to solve the problem, that we’re facing. But a fair assessment of the present state of our project would probably be that we’re still wading around somewhere in the middle of the river.

But let me try to give you an idea about what we’re struggling with right now. As you might recall from my previous newsletters Johannes and I had reached a point where we had a proof of existence of our theory. What this means is that we could prove that we had a solid mathematical framework with an algebra of operators represented on a Hilbert space (if you look back into newsletter nr. 2(b) you’ll find explained that a quantum theory consist of an algebra of operators, which ‘live’ in a Hilbert space). We had also found this interesting Bott-Dirac operator, which gave us the dynamics of a free gauge theory.

So what does this mean? Well, it very roughly means that we had found a framework that describes for instance a Yang-Mills theory at the level where we have not yet included interactions. It is what we call a free theory. We believed that we could include the interactions too but what wasn’t clear was how precisely these would fit into our particular framework. Its clearly not enough to be able to include them in a haphazard manner — it has to look right or else its probably wrong.

Now, if you know a little about theoretical physics I’m sure you’ll appreciate that there is a huge difference between the free theory and the interacting one. Its nice to have some mathematics that captures the free theory at a non-perturbative level but the real party begins when you start to consider interactions. That is the hard part.

The key issue that we’re boxing around with right now is related to what is called gauge symmetry. There is a special kind of symmetry in all the theories that describe the forces in Nature — the electro-magnetic, the weak and the strong nuclear forces and also gravity — which is related to a redundancy in their basic mathematical formulation. If we for instance look at electro-magnetism, which describes the electric and magnetic fields through the Maxwell equations, then there exist a very elegant formulation of this theory where the electric and magnetic fields are combined into a single entity called a gauge field. When you rewrite the Maxwell equations in terms of this new field they take on a very elegant form, which points directly towards the special theory of relativity and, indirectly, the general theory of relativity too. This formulation in terms of a gauge field has also a straight-forward generalization to what is called non-Abelian gauge theory which is precisely the framework that describes the weak and the strong nuclear forces (and, in fact, gravity too). So the formulation in terms of the gauge field is powerful, it tells us something deep about Nature.

Now, what all this really means is that for Johannes and me to include interactions in our theory we need to implement the gauge symmetry correctly. That is the problem we’ve been working on. And we fairly quickly found a way to address the problem within our framework but once we started to walk down that path we soon encountered some serious problems.

Now, problems are not always bad. When you run into problems it also means that you’re beginning to understand something. So problems are good, it shows that we’re moving forward. You can’t find answers unless you’re asking the right questions. But all this also shows us something else, and that is that Johannes and I to some extend have lost control of where this project is heading. In the beginning when we mostly had a bunch of wild ideas we were more in control of the direction. But now when our ideas are materializing into something rather concrete we’re no longer the ones who decide. The math is deciding where we’re heading and we’re sort of running behind it. I still think that we have some choices to make — do we head down this path or that one? — but our choices are getting more and more restricted. Right now, for instance, its clear that the question about the gauge symmetry is critical and that question probably only has one answer.

To be specific (and this is something I’ve mentioned before), I’m no longer completely sure what kind of theory we’re developing. I thought it would be a theory of quantum gravity — and that is still what we’re thinking about, what our intuitions are telling us — but it may also be that we’re developing something else. It could also be a kind of non-perturbative quantum gauge theory. Or something completely different. I am simply not sure anymore. We’ll see. I hope I’ll be able to tell you more soon(ish).

Have a nice summer

With this I end this newsletter. I expect to write to you again sometime in the fall 2019. Hopefully I will then be able to tell you more about the gauge symmetry and the direction of our research project. Until then I wish you all a fantastic summer. Take good care of yourself and remember to treat each other with kindness and love.

Support my work on PayPal 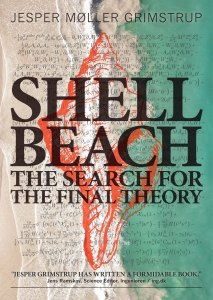 SHELL BEACH can also be ordered in danish. 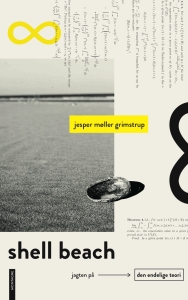